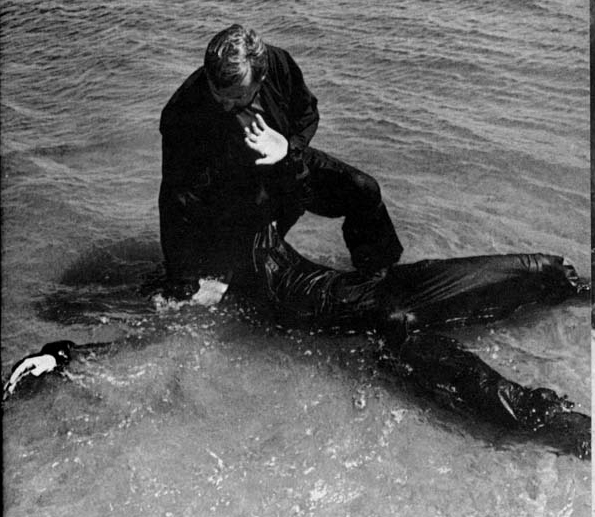 Welcome to my Ninja World. My name is Peter Brusso and I have been studying in the martial arts since the age of 6 where I was fortunate enough to get into a kids judo class; which was held in the back our a feed and grain store! This site will work on all the major things I did in Ninjutsu, the politics which I'm sure will cause more grief than they are worth but what the heck, huh?

I have had some very good teachers in my travels through Ninjutsu. I also believe I have added to the quality of the Ninjutsu teachers that I have interfaced with, adding some peer culture that many have picked up and used. This is a wonderful way for me to give back to those that have taught me Ninjutsu.  Learn More 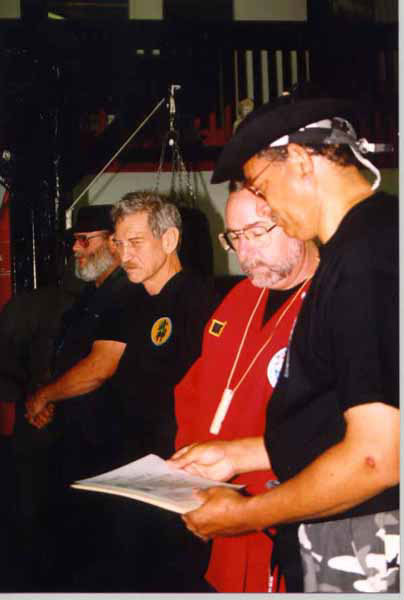 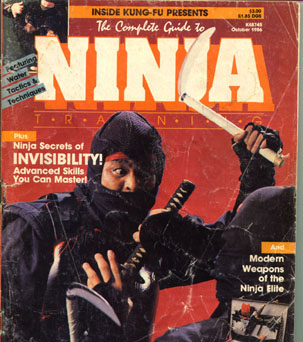 I have enjoyed being in many magazines, documentaries and had one movie based on me in real life. I have had some great opportunities in the mid 1980's with being almost cover to cover in the "Ninja Magazine" where I got to show off some of my Ninja inventions and modernizations of ancient Ninja weapons. Learn more

Anjing Banfa was an art...

The Ninja Magazine in or around 1985. This was a really cool shoot in Hollywood on stage and it was my first time around a "smoke machine" which is really very dangerous as it's vaporized diesel fuel! After the shoot my gi or shinobi was diesel fuel soaked on one of my friends upon exiting the stage said "anyone for a smoke"... I said "absolutely don't get near me with an open flame!" It turned out to be a joke as he didn't really smoke but knew my shinobi was soaked.

They later did another shoot and I think this was in the 1986 time frame where they came down to San Diego where my sail boat was and shot some really cool material. We were shooting originally over on "Spanish landing" across from Harbor Island Marina where my boat was at the time. Here is picture of shallow water drowning technique which was shot just before the Harbor Patrol and the Police made a surprise visit to our shoot. I had a back of weapons and they held me and my opponent at gun point then went through my bag. They also harassed the Hollywood guys who only made things worse... so we moved to the marina where it was private property. Over at the marina we did some really need stuff in and around my boat plus up in the pool with Ninja weapons. This shoot dominated the next Ninja magazine but I did share some space with Hollywood type ninjas… not the real kind.

Anjing Banfa was an art that I developed over time. Having gone to war with a good understanding of Judo, Hopkido and then machete fighting plus knife fighting… when I came home… I couldn’t go into a Dojo again. I spent 10 months in Cambodia where we were not supposed to be thus if we were captured… no one was coming for us. We all understood this but that isn’t the thing I really want to convey to the readers. It was that open combat, close quarters combat, in the environment has no parallel in training. My first fight was within 30 seconds of exiting a helicopter and it was a machete battle! It was a running battle too that lasted about 20 minutes as I recall. I learned a lot then that our training, as best served as it was, was totally in error!

We needed to be more realistic and as Col. Channon of the first earth battalion said “We need to me cunning”. So true! In a dojo everything is well lite and you have a controlled surface plus rules to fight from. This is a gross error if you are trying to be the best soldier and war fighter you can. You have to learn to fight in all environments and under the worst conditions ever. If you can do this then you stand a reasonable chance to survive combat. When you come home and see pads, foot and hands, rules and in my day no ground fighting… well you see why I couldn’t get behind that.

My war experience was a classified effort and still much is. So when I came home I hung up my black belts and then just visited some teachers. Added to things I didn’t have. I use to like to fight at Sacramento State with some of the “accomplished” artists I found there. I got to learn some really cool Hanbo stuff that later I found out came from Ninjutsu! I took an injury there which resulted in my right knee being operated on in the VA. Never the same and over the years I have had to have 3 operations on that knee and each time I had to adapt my fighting style even more. Over the years, and you can see it in the videos I have had to re-adapt my fighting style. As I get older I’m still doing it so for all you people out there… you can adapt your fighting style to your injuries and age!

So, I started or took over the Livermore Laboratories defunked martial arts club, reorganized it and started with a very aggressive and out of the box martial we ultimately called Anjing Banfa. The name was given to us by a Tai Chi master named Chi Young King… he is watching us and is the guy to the far left of the picture in the tan jacket. 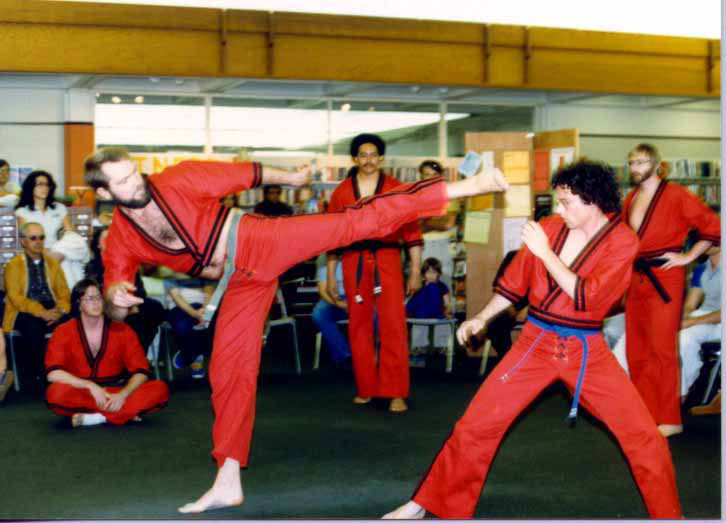 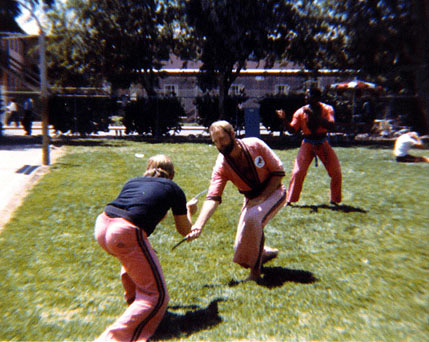 We not only grew in popularity but also my green belts used to beat up 2nd degree black belts of other systems. Just ask now Master Robin Myers! He ate up two in one night as he managed our downtown Dojo while I was off doing something. Our system is very heavy on capability and with a very diverse knowledge base to draw from, we are a combat only art; born from combat and for combat. We are not a sport art and this is also true for Ninjutsu, but I’ll cover that later.

I (Peter Brusso) have been criticized by many Ninjutsu practitioners of teaching Anjing Banfa as Ninjutsu. It’s not. My (Peter Brusso) Ninja teachers have seen my classes and can assure you it’s not so stop saying it is.. you don't understand Anjing Banfa at all. I have had many Ninja masters around me and they love what I do with Anjing Banfa because they don't do it in Ninjutsu. Enough said on that point.

Chi Young King had watched us train on the grass at Livermore National Labs for about a year, and he walked across and said “you know what you guys are?” I said artists? He said no… “Anjing Banfa”… and I said what was that? A Chinese cold? He laughed and said not… you guys are like a quiet spirit… Anjing Banfa…. We don’t have lots of flowery bolster or ego… so that was that. He wrote our kanji out… which translates to quiet spirit. And that was that.

One thing about our black belt tests; are they last over a 7 day period! And no two are the same but at the heart of them are the Anjing Banfa principles. Awareness, adapt, be as prepared as you can, always expect the unexpected, nothing is as it seems, overcome, and don’t quit.

For those interested you can go see some of our unorthodox tests at http://www.anjingbanfa.com